When Messingham Primary School told us they were studying Ancient Egypt and Hidden Treasures, we were delighted to be able to offer them a series of workshops so their children to create artwork in response to the school's theme.

Almost 90 children visited the centre over two weeks, to look at Richard Bartle's Deities at the Bottom of the Garden and to consider why particular images and symbols are associated with different religions. 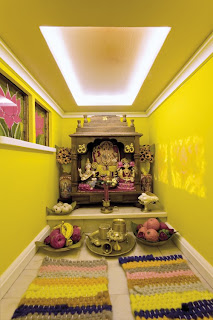 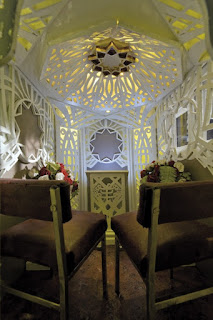 Each pupil filled in a worksheet about Richard's exhibition, and many of them asked lots of valid questions, like:

1) "Why do the sheds smell?"
2) "Why are some sheds facing the wrong way?"
3) "Why did Richard Bartle want to make this artwork?"
The answers they discovered:
1) Some of the sheds have a distinct smell that is associated with the places of worship, for the religion they represent.
2) Some of the sheds are pointing away from the others. This is because those sheds host religions that worship in the direction of Mecca.
3) Richard Bartle is interested in the act of obsession, and displayed that interest by spending three years developing ideas that link obsessive behaviours in sheds, crafting and religious behaviour.


Children were encouraged to bring along objects that they hold dear to them; objects that aren't worth much money, but are valuable for other reasons. They sketched these objects, while considering why they were treasured. At Messingham Primary, the pupils are lucky enough to have iPods to record the work they see and make. Some groups used their iPods as reference for their chosen objects or things dear to them. 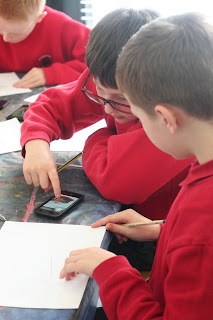 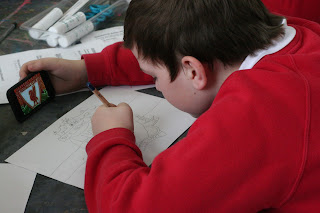 Once sketches were complete, we started to construct a specialist book structure, called the "Flag Bind". This book holds lots of opportunities to hide our secret treasures away, much like the Egyptians did in tombs. There was lots of concentration in the room, when pupil's were following careful instructions for measuring, marking and cutting. 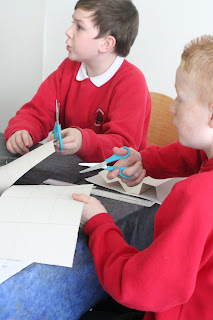 Once the flag books were put together, the group used our initial sketches, to make mono prints of them. There were some great outcomes, and some children were amazed to see their drawings recreated backwards and with different textures than they'd expected. 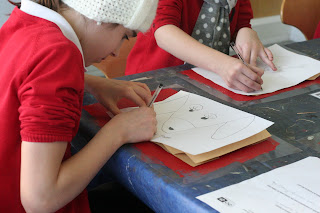 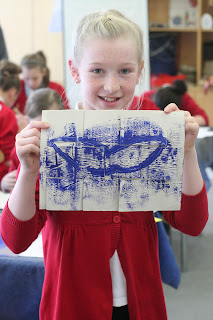 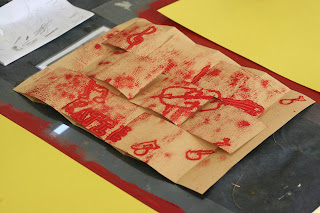 Once the content of the books were complete, we moved on to mono printing an image for the covers. Using Egyptian imagery for inspiration, pupils drew pyramids, palm trees and hot blazing suns to decorate the outside of their books. 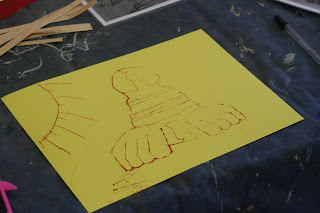 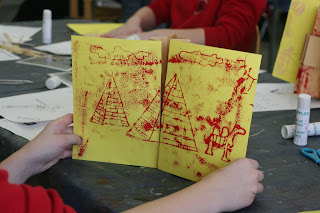 These pictures were cut in half, and applied to the books pages. If stood in a certain position, the image is recreated into one whole - this is a conceal and reveal feature of the flag book. 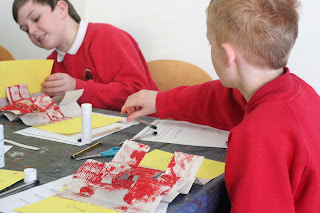 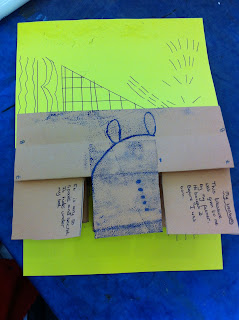 One class had so much time at the end, they wrote about their Hidden Treasure, on the blank spaces inside the books - another conceal and reveal asset of this book structure. Once the book covers are pulled apart... the original image reforms to reveal itself once more. 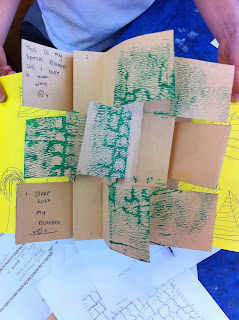 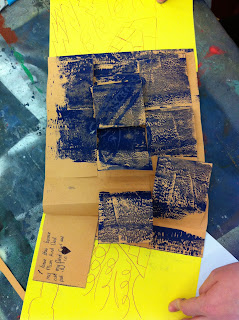 Feedback from teachers and pupils reveal Hidden Treasures as one of the most successful﻿ workshops on offer at 20-21:
"Thoroughly enjoyed and very well led. Thanks!"
"...lof of new ideas. Thank you"
"Lots of WOW!!"
"It Was Amazing! I would do this all the time if i could, I will be coming without school oneday! because its great" (sic)
"I Liked the mono printing because it Lookes effective. It could of been better if we spent the WHOLE day there" (sic)
"10/10 because the sheds were really awesome!"
"I thought the 20-21 centre was unique in many ways."
It is easy for the workshop to be adapted to suit class room topics. If you are interested in booking this workshop, or one similar, get in touch with our Education Officer, Hayley McPhun on 01724 297074, or email her at hayley.mcphun@northlincs.gov.uk
Thanks for reading! :)
Labels: 20-21 Visual Arts Centre, Arts Education, Book binding, Conceal / reveal, Creative Learning, Cross curricular arts, Flag bind, Messingham Primary School, Printmaking, Religious Education, Richard Bartle

Teacher Twilights are back at 20-21! On Wednesday 6th March, we will be hosting two sessions aimed at Art teachers and DT teachers, to engage with and realise the potential of our upcoming exhibition "Gothic Kinetic" by theatre group Sharmanka. 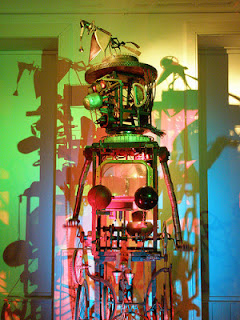 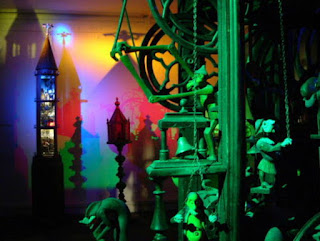 Sharmanka's beautiful kinetic sculptures take us on a magical journey through 20-21's old church building. Victorian household machinery and carved wooden sculptures will play an 18 minute show with incredible choreography "performed" to music and synchronised lighting.
Gothic Kinetic offers a wide range of education opportunities, which is why Education at 20-21 have compiled a Teacher Twilight session to inspire and excite creative teachers. This FREE event will include an introduction to the education offer here at 20-21, a tour of the exhibition, some taster activities and the all important refreshments and biscuits to accompany an opportunity to network and ask questions.
The two sessions will run from 1.30pm - 3.30pm and again from 4.15pm - 6.15pm. Book your place by Friday 1st March, by contacting our Education Officer, Hayley McPhun, on the details at the bottom of this post. 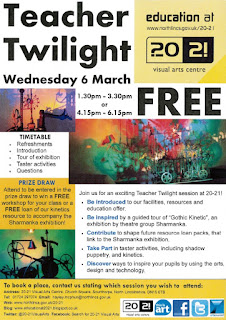 This flyer should land in your email inbox over the next few days, if it doesn't, it means you're not on our mailing list to recieve such exciting opportunities and news on our upcoming projects. To be added to our Education mailing list, please email our Education Officer, Hayley on hayley.mcphun@northlincs.gov.uk  or call her for a chat about other opportunities on 01724 297074.
Labels: 20-21 Visual Arts Centre, Arts Education, Arts events, Arts Workshop, Creative Learning, Cross curricular arts, KS1, KS2, KS3, KS4, Teacher Twillight, Visual Arts
Newer Posts Older Posts Home
Subscribe to: Posts (Atom)