Each Monday over the past three weeks, 20-21 have been delighted hosts of Henderson Avenue Primary School's  year two classes!

The pupils came along to make clay sculptures, but before getting our hands mucky, we studied tabletop sculptures and their properties, as well as discussing how they might have been made. 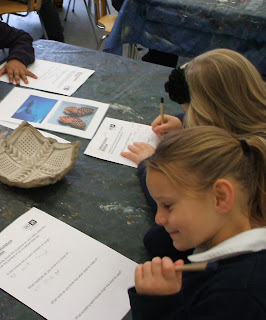 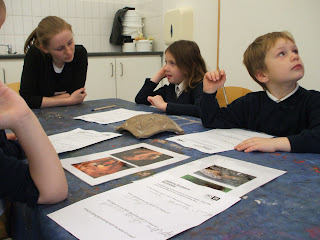 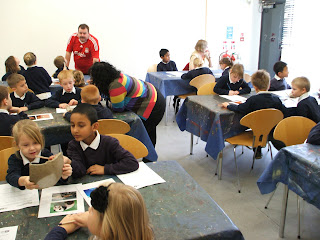 Children got the rare chance to handle the artwork, touching what the sculptures felt like and discussing how we think the artist made them.

The classes are studying endangered animals at school, and were lucky enough to visit our All Things Bright and Beautiful exhibition, which features some endangered creatures. 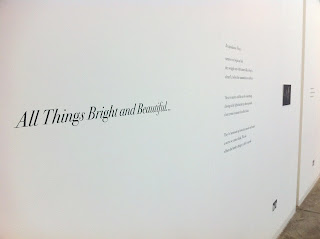 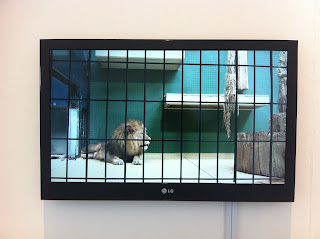 After visiting the artworks and talking about them, the pupils were asked to draw a chosen endangered animal, keeping in mind that they'd be expected to make the drawing into a 3D model.

Once the sketches were complete, we all played with our clay, softening it and understanding it's properties. We were using lots of different tools, to create interesting marks and shapes. 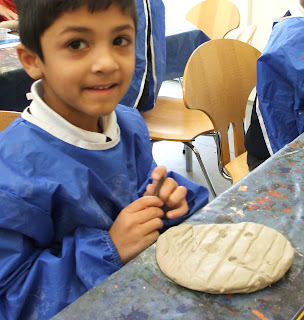 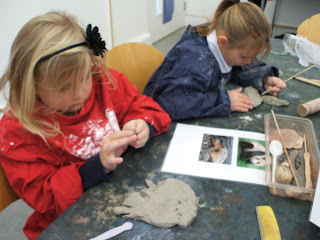 All of the models were very creative and interesting to look at. They have spent quite some time in the gallery spaces drying out. We are becoming really rather attached to some of them! 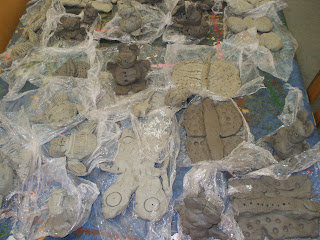 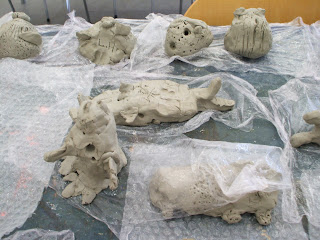 Some of the classes were so good at sculpting, that we had some time to go and visit the main exhibitions in the church spaces.


Children walked around all our exhibitions and were asked to choose their favourite piece of work and explain why they liked it, and what they thought it was about.
﻿ 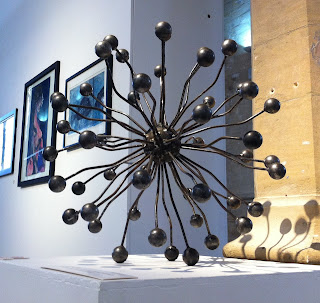 ﻿ One young man chose Irene McGrath's "Allium" and explained: "The metal ball is for Dr Fake, who has died and this is his life source, and it's in the church because it's being protected"
Another young girl liked this piece, also, telling us: "This has been an explosion in space and the big ball is holding onto the exploded bits, which are the little balls." 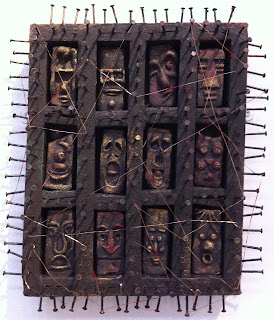 A pupil chose Jon Cocks' "Facebox", as their favourite artwork: "This piece has nails in and you weave your gold thread around the nails in a way around the faces and when you find the funniest one, you stop there and fire comes out"

Children were asked to look aorund at the architecture of the building and think about the fact that it used to be a church. Here are some comments on the building, and it's previous uses (they cheered our day up, here at 20-21!):
"The altar is where they put the babies what have already been christened, to let them dry off"
"The rose window was where angels used to sit, one on each side, to look after all the children."
"I can't find god"
"My favourite thing, is that there!" (pointing at a fire detector)


All in all, each of the workshops with Henderson Avenue Primary School, were very productive, creative and exciting. The children are currently working on their posts for this blog... keep an eye out for us uploading them in the next few weeks! Thank you to all the teachers and pupils who gave us such a treat by visiting us here at 20-21!

It's TAKEOVER DAY today! A day where children and young people across the country get to have their say on issues and services that affect them and their future.

Here, in North Lincolnshire we're lucky enough to have Takeover run as a week long event, for young people to get the maximum experience out of the opportunity.

20-21 were really keen to be involved in such an exciting week, so asked art students from John Leggott College and North Lindsey College, to come along to our centre to help us think of new ways to bring young people into the centre, and encourage students to use our facilities in their studies.

Biffy and Aiden, wrote a report about the sorts of things they got up to and what they think to 20-21. Below, is their article and a few photos taken during their time here:

During takeover week we have had discussions about the progress of 2021 Visual Arts Centre and how it could be improved to accommodate for teenagers. The ideas that we came up with were student open, competitions/fundraisers for charity, photography and fashion exhibitions and more publicised workshops.

On the first day we discussed the ideas above and how we would improve the amount of visitors to the centre. A variety of problems such as publicity of the centre and its location mean that the general public are unaware of its presence. The need for convenience means that the centre is not an ideal place for people to congregate and it is hidden by the library. We suggested that ‘posts’ could be placed in front of the library and at the bus station in order to draw attention to what the centre has on offer.
﻿﻿﻿ 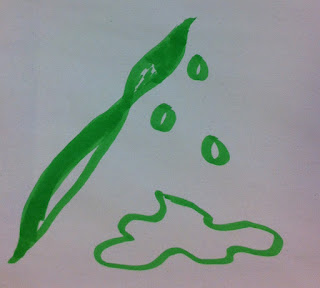 The second day was more practical as we worked in a team to create a Christmas tree out of cardboard and general craft materials. 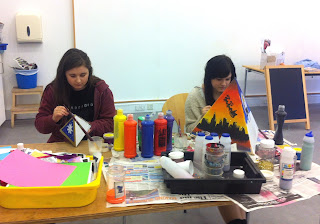 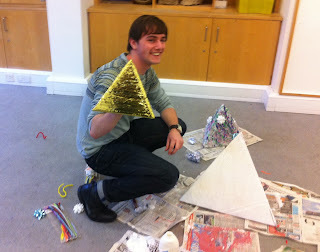 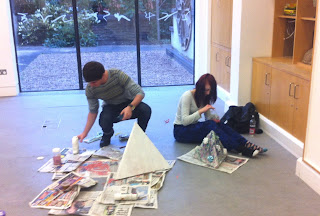 Tomorrow we plan to present our findings in ‘The Great Debate’ to other young people. We would like to inform people of our opinions that will hopefully make the 2021 Centre more successful as it is an important part of our community. Offering expressive freedom to the general public, from children to adults 2021 enables community integration but also the ability to explore thoughts and ideas.

The atmosphere at 2021 is relaxed and professional which allows for comfortable viewing of exhibitions (of contemporary artists), which are refreshed every few months to maintain public intrigue/interest.


The students Christmas tree is on loan to the stand at Great Debate, before coming back to 20-21 to be included in our Winter Wonderland exhibition, alongside some prestigious local artists.


The staff at 20-21 really value the input of our group of Takeover students, and were suitably impressed with some of their creative talent! We are looking to develop a few of the key points raised during their time with us. If you are interested in being a part of the student focus group, or have any ideas for the name of the group, please get in touch with our Education Officer, Hayley McPhun: hayley.mcphun@northlincs.gov.uk
Labels: 20-21 Visual Arts Centre, Arts Education, Arts Workshop, Creative Learning, Engaging young people in the arts, John Leggott College, North Lincolnshire Education, North Lindsey College, Visual Arts

A Winter Wonderland comes to 20-21

﻿This Saturday is the opening of a brand new Audience Engagement exhibition called Winter Wonderland. Lots of artists and groups from across the region have been busy making wintery trees for a festive woodland in the Nave Gallery at 20-21. The opening is a free event with lots of fun activities for all the family.

It's been a spectacle to watch the artworks coming together in the space, especially with the light shining through the old church windows.

For more information on any of the artists, or about the exhibition, please don't hesitate to get in touch with the gallery on 01724 297070. ﻿
Labels: 20-21 Visual Arts Centre, Arts Education, Arts events, Arts Workshop, Creative Learning, Visual Arts, Winter Wonderland

More and more schools are applying for Artsmark this year; "...a programme to enable schools and other organisations to evaluate, strengthen and celebrate their arts and cultural provision." 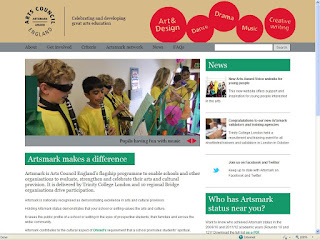 Criteria to achieve the Artsmark is changing, meaning it is now crucial for schools to deliver Arts Awards. 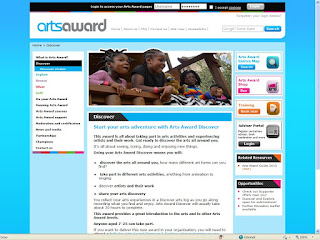 20-21 are a registered Arts Award centre, with trained staff to deliver the awards from Discover to Gold levels.

During any level of Arts Award, it is important for children to access a cultural centre, and what better place than to visit 20-21 Visual Arts Centre? We continually have multiple exhibitions by contemporary artists; some of whom are based in North Lincolnshire and many hold workshops in line with their exhibited work.

Get in touch with our Education Officer, Hayley McPhun, if you are interested in booking a visit or would like to find out more about how we can help you deliver Arts Award in your school/after school club. Or, for a more in depth look at Arts Award, with the chance to meet experts in the field, come along Thursday 15th November, 3:30pm - 5pm, to the session being hosted at 20-21. For more information, click this link.

Clay Creatures and the chance to win a prize!

It's been a while since our last post, because we've been busy getting ready for some exciting workshops with Henderson Avenue Primary School. Their year two pupils are studying endangered animals and really want to make 3D explorations of chosen endangered creatures.

The children will explore all the animals that feature in our popular exhibition All Things Bright and Beautiful, and make an animal out of clay using unusual household objects and traditional sculpting methods.

Our Education Officer has been making some creatures with the help of visitors to the activity table in the gallery. Can you tell what this one is? Write your answer as a comment, if you're correct, you're in with the chance of winning a prize! 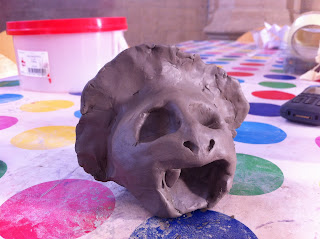 ﻿
Photos of the school workshop creations will follow in the coming weeks.

To book this or a similar workshop, please contact Hayley McPhun on 01724 297074 or hayley.mcphun@northlincs.gov.uk