As an ongoing project with Brumby Junior School, Education at 20-21 delivered an Everyday Objects workshop to year six's as part of the school's creative curriculum.

Mrs Musgrave was inspired by Jason Taylor's Everyday Objects exhibition, here at 20-21 Visual Arts Centre, and decided that her offer for the school's creative summer term would be for the children to get involved with recycling household objects into artwork!

We started by looking at some of the examples the pupils had made in the lead-up to our workshop:
﻿﻿﻿ 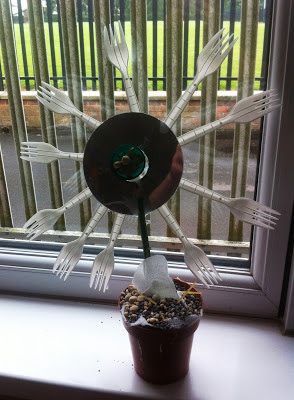 The workshop set many timed challenges for the children to think outside the box, quickly. The class were split into groups of three and were expected to use their initiative and observational skills to recreate objects displayed. The workshop leader would hold up unusual objects for a matter of seconds. The children were expected to gather the correct materials and notice methods and patterns in the makings of the objects, before working as a team to recreate them.

First up,  the Peg Bowl, a temporary small structure that followed patterns, repetition and direction: 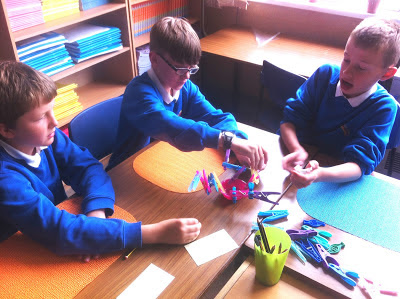 Some groups were more successful than others, noticing the patterns of colour and repetition. The outcomes were all beautiful and reminded us of lots of different things, including tarantulas and space ships.

Next up, The Straw Leaved Clover!  Thinking along the lines of Jason Taylor's humour regards titles for his objects, our Education Officer used straws and wire to create this "interesting" clover:

Once all groups were complete, they were chosen to display and discuss their method of working as a team and the decisions they made as designers, to create their Straw Leaved Clover.

After a tidying up operation, the final creation session was for the pupils to work independently to create Flyer Flowers! 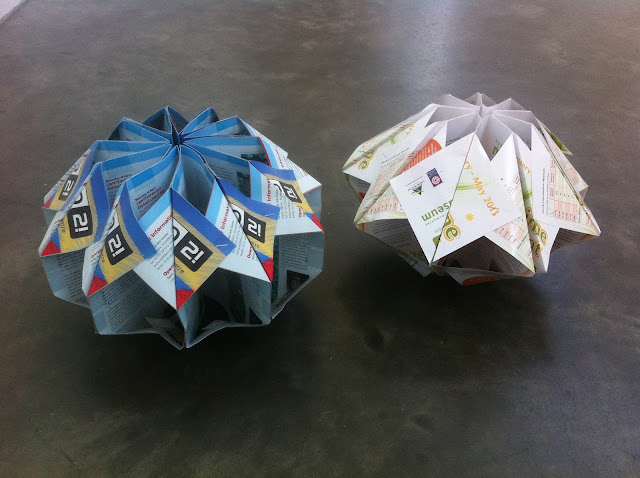 Armed with a stack of old flyers from 20-21's archives, and a stapler filled with staples, the class created some truly lovely and greatly successful Flyer Flowers! 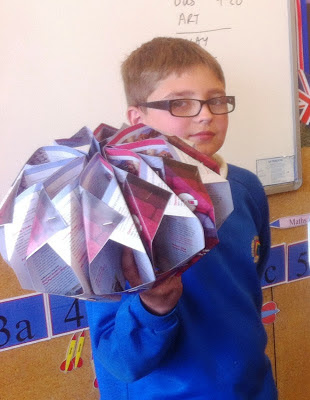 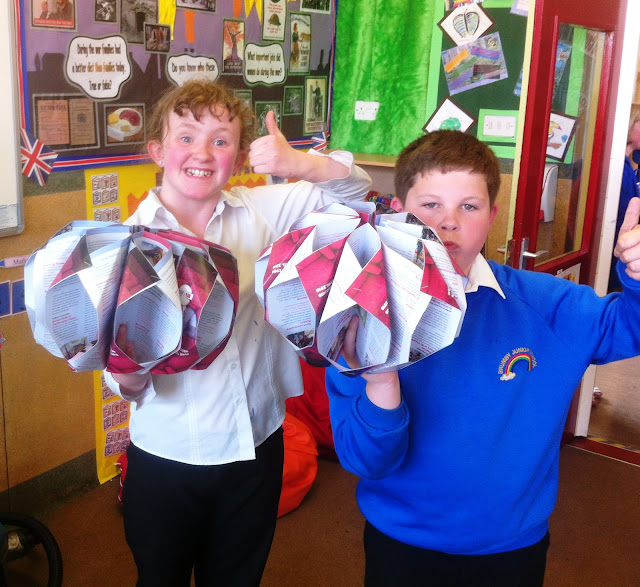 The highlight of the day was watching the class work together and notice the properties of various household objects. Some of the children really thought things through and recognised qualities in objects and each other, that they'd never seen before.
Thank you Brumby Juniors! we'll see on 12th at your sharing day!!﻿
Labels: 20-21 Visual Arts Centre, Arts Education, Brumby Junior School, Creative Learning, Jason Taylor, KS3, Recycling, School blogs, Visual Arts

A few weeks ago, we blogged about Brumby Juniors using our workshops and exhibitions as starting blocks for their creative curriculum for the summer term. Last week, our Education Officer went into the school to deliver a session on making puppets for Mrs Pitois' shadow puppet performance at the end of term.

Children have chosen to work on two stories. One story being that of the football game that took place on the front line of the secod world war. What imagery this conjurs up! This group are making lines of soldiers that march along to soundscapes of the world war, with air raid sirens and gun fire.

The other story is one of a woman and a flying head. The flying head tries to eat the woman during a trip gathering crops in the local forest. The woman spites the flying head after several failed attempts to defeat him, by cooking a hot stone and throwing it into his mouth. The children made some beautiful birds on sticks, that, as a result of our workshop are now flying birds, because we attached hinges for moveable wings.
One table of pupils worked especially hard to create a very large flying head, with a moveable jaw. The detailing was excellent!

All in all, it was great to be a part of Mrs Pitois' creative curriculum and to introduce shadow puppetry to some very interested pupils! No photos appear, because we have been kindly invited to the showcase day, at which we hope to take lots of photos and post them on our blog.

We are revisiting the school, this week, and are going to Mrs Musgrave's class who are studying Everyday Objects and recycling in art, as their theme. This class used Sharmanka and Jason Taylor as their starting point during a Self-Guided visit.

Stay tuned for most posts about how we are working with Brumby Juniors to enhance their creative curriculum, and for pictures of the beautiful work they're making!
Labels: 20-21 Visual Arts Centre, Arts Education, Brumby Junior School, Creative Learning, Jason Taylor, School blogs, Self Guided Tour Pack, Shadow puppetry

Sometimes we get some really interesting requests for workshops, here at 20-21; so when Burton Primary School called with a request for a POP ART themed workshop based around Andy Warhol, we were really excited!

Andy Warhol is one of the most famous artists in the world, whose work continues to inspire creatives, today. His work is instantly recognisable and infiltrates the world of art, fashion and music. Some of the most iconic images and portraits in art were created by Andy Warhol. We used some of these images in our workshop with Burton Primary, last week:
﻿﻿


Andy Warhol's artwork became so sought after and in high demand, that he opened an art studio called "The Factory", in which he employed many people to create some of the artworks for him. Warhol would surround himself with famous icons and celebrities, whom he would become obsessed with and recreate their images over and over again. He believed that by recreating someone's portrait repeatedly, he was helping to keep them alive, even after they whad died.
We focused themes of repetition, popular culture, colour, line and portraits throughout our Burton Primary workshop, last week. Ensuring that children understood what Warhol's aims were with over saturating the market with repetitive images and iconography. 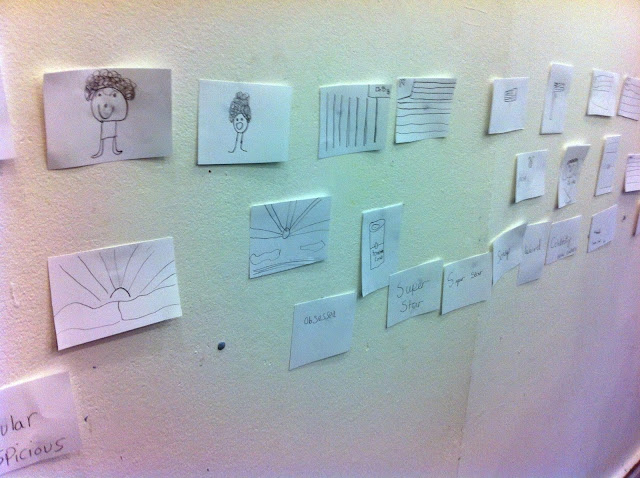 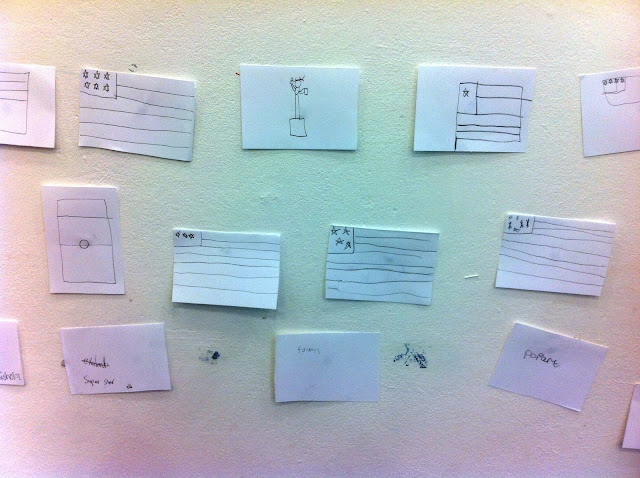 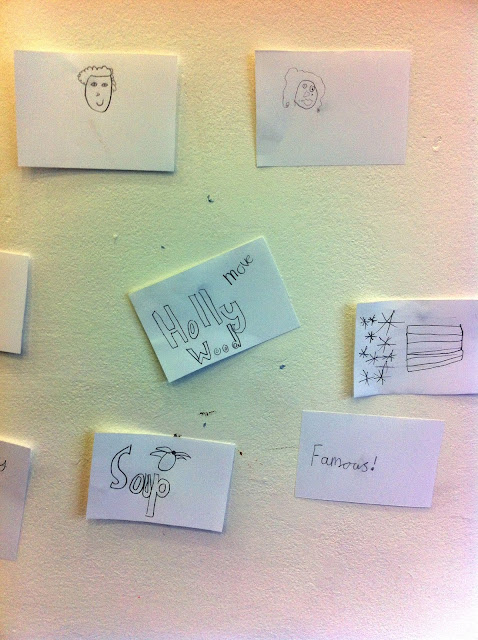 Using some of the terminology we learned during the morning, we went to look at an exhibition in 20-21 Visual Arts Centre. Jason Carlisle's portraits, hold similar themes to Andy Warhol's work; repetition, line, colour and portraits. 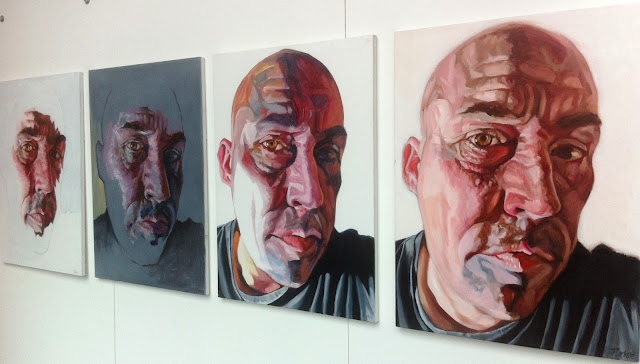 Children were asked to fill in a worksheet to remind us of the similarities and to get them thinking about the artwork, critically: 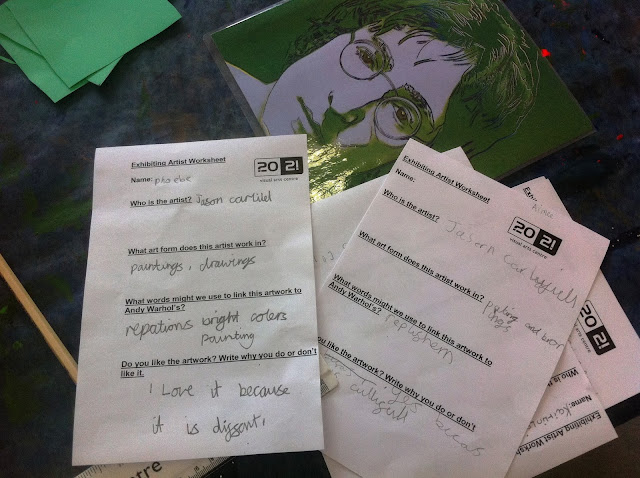 Worksheets to one side, we began making our pop-art inspired creations. The pupils measured out four 10cms by 10cms squares and swapped with people around their table to make sure everyone had lots of different colours to stick down: 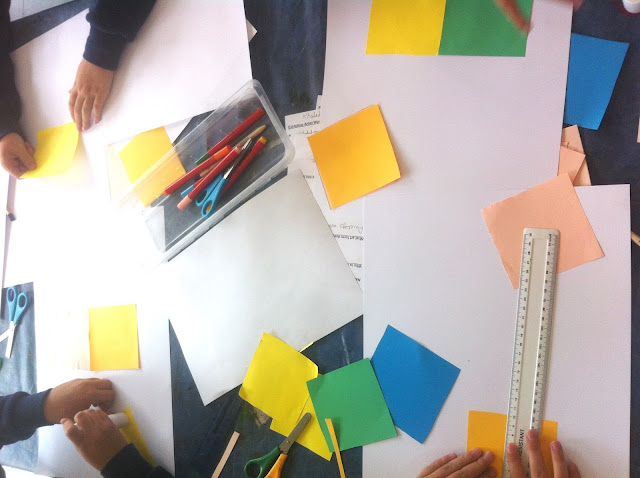 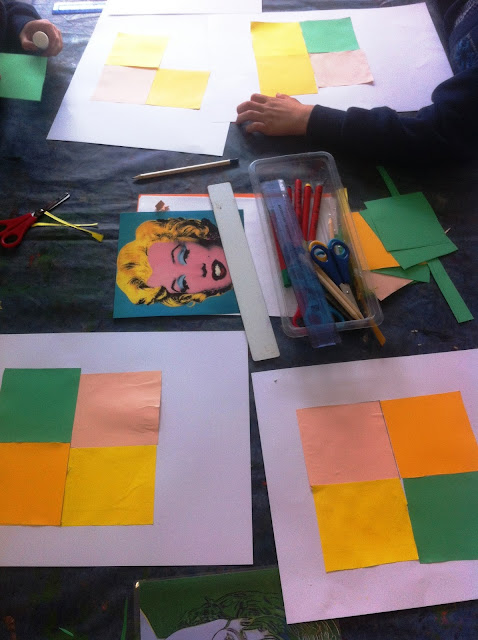 The artwork was left to dry. After a well earned lunch break, we all sat and carefully drew a picture of the person to our left. The pupils turned out to be excellent observers and very creative at drawing! 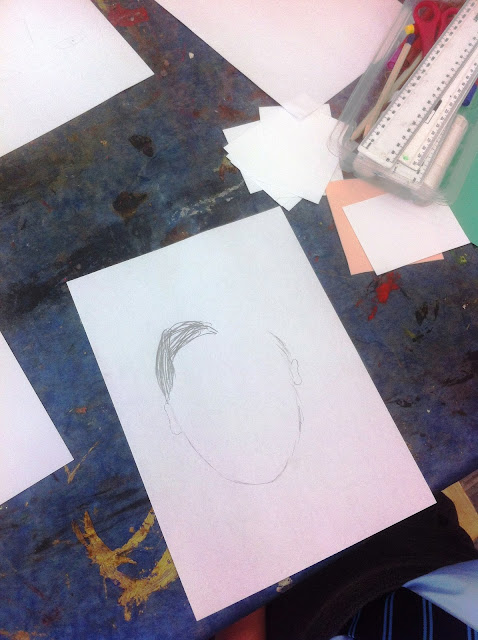 The pictures were photocopied and features were cut to create simple jigsaw type portraits of our fellow artists. These jigsaws were used as stencils for screen printing our portriats! The colours we used were so bright and vibrant, we all had to wear sunglasses to look at them!! 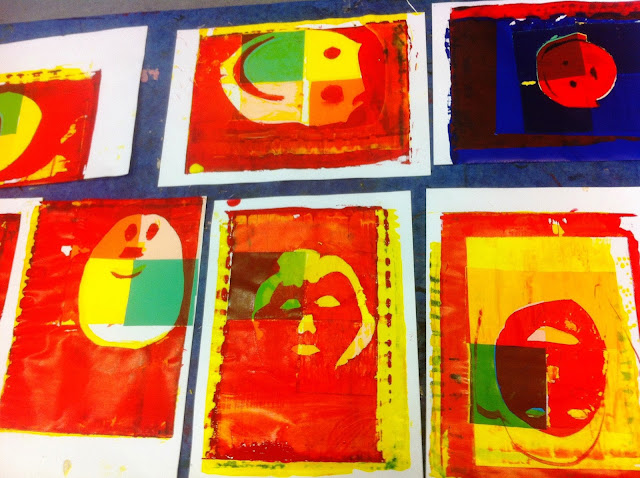 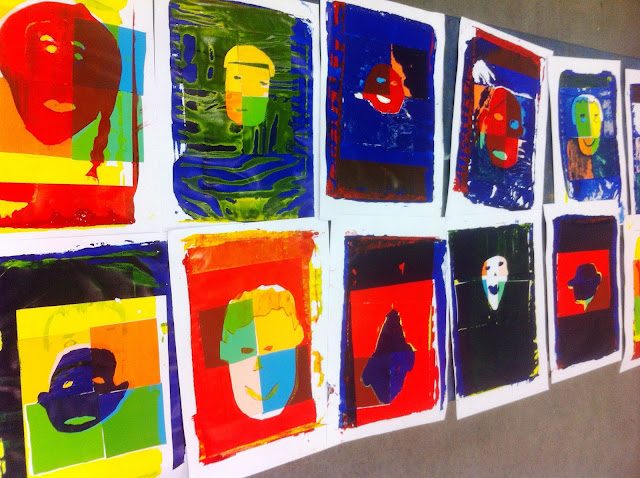 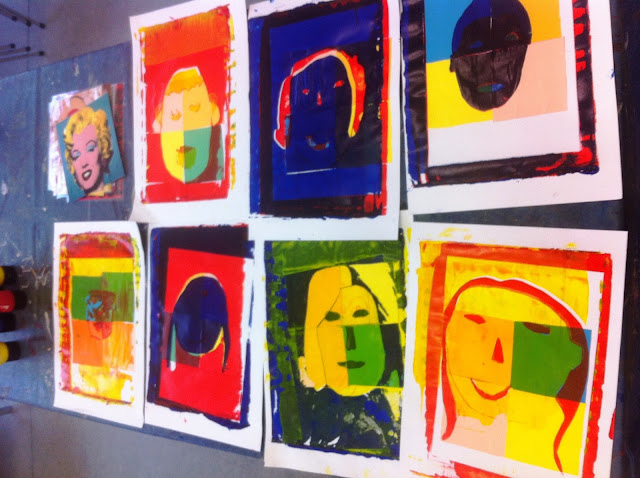 It was such a delight to work with Burton Primary School and especially to deliver such an interesting topic! A big thank you to all our helpers and teachers on the day, who made sure everything ran smoothly! A bigger thank you to the Burton Primary pupils who were excellent artists in our Factory on the day!
Labels: 20-21 Visual Arts Centre, Andy Warhol, Arts Education, Burton Primary School, Creative Learning, Pop-Art, Portraits, Printmaking
Newer Posts Older Posts Home
Subscribe to: Posts (Atom)